Before you will read the law paper sample from our professional legal writers, let us mention that law and legal papers are very hard to write. So our advice to you is to ask for help from our law and legal papers writing service. Our professionals will write your paper on any deadline and at fair prices. Put the requirements of your law research paper into order form or contact our customer support service through online chat on E-Mail.

We Deliver All Kinds of Law/Legal Services

Juvenile delinquency refers to illegal antisocial behavior displayed by persons who have not reached adult age. Juveniles despite their age are capable of committing serious crimes. The causes of juvenile delinquency are numerous and debatable. However, society and law enforcement bodies understand that the responsibility for juvenile crimes cannot be pegged entirely on juveniles. Therefore society must find amicable solutions to help manage Juvenile delinquency. The development of the juvenile court system was aimed at ensuring that Juveniles are given a chance to reform and mature into responsible adults. The first step in resolving any problem is to identify its cause or origin. Therefore this paper seeks to identify the causes of juvenile crimes and further looks at the various controls that can be used to check the rise of crimes committed by juveniles.

As mentioned earlier the causes of juvenile delinquency are several and are debatable. Some of these causes are based on theories that have also been criticized. The following are some of the causes of juvenile delinquency. It is a common assumption that the behavior displayed by juveniles was learned from their parents or guardians. This to some extent is true because once a child is born the parent is charged with the duty of according to the child's love, care, and guidance. Poor parenting may indeed influence a child into committing crimes. 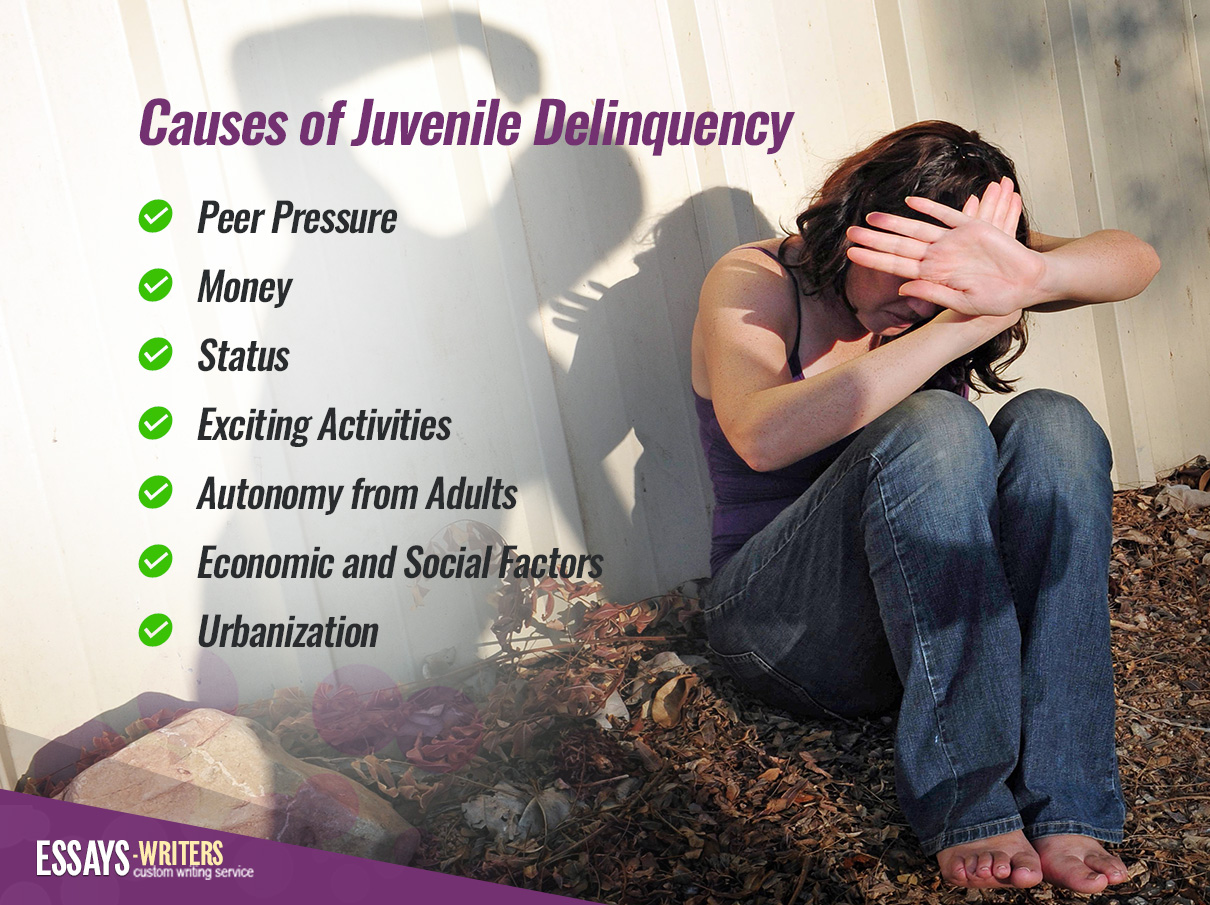 The strain theory explains that juvenile engages in crime after experiencing different types of strains. Juveniles are frustrated because they cannot achieve their targets. Strains result from failure to achieve goals, these goals include

First-time customers get 15%OFF
Order now

People who do not have money may struggle to get money, and in doing so they may opt to go for illegal channels thereby becoming delinquents. Strains such as money are hard to manage because the individual needs the money to buy basic needs.

Everybody wants to be accorded respect in a just and fair manner. Some individuals who perceive that they are not accorded respect may engage in fights or arguments to prove their superiority. In doing so these people may violate the law and hence become delinquents.

Sometimes out of curiosity, young adults may engage in activities such as stealing which are clearly against the law. This is because the legal channels will hardly provide systems through which these children can find adequate fun.

This refers to juveniles' attempts to free themselves from the control of adults and other people. In an attempt of doing so the juvenile may end up violating the law hence becoming a delinquent.

Poor economic conditions may encourage juvenile delinquency. This is because children born in poor families do not have adequate resources and may find it hard to obtain basic needs such as food and shelter. Children brought up in these families may be forced to look elsewhere to satisfy their needs. This leads to exposure to delinquents and other social injustices

Urbanization has revolutionized social association. This has been coupled with the emergence of new technology. This has made it difficult for guardians to keep track of what their children do. As a result of urbanization, children get exposed to various negative things which makes it difficult for parents to keep track of what activities their children are engaged in. Video games and films, for instance, have exposed children to violence at a tender age.

Talk to an operator!

Want an expert write a paper for you?
Live chat

Generally, people feel that tough measures should be adopted to reduce the incidence of juvenile delinquency. The juvenile court system was established in the late 1800s to ensure that juveniles were given a different system of the trial from the adult court system. The juvenile court system allows the child to reform and become a useful member of society. Control of juvenile delinquency has been left to the major institutions in the country. Rehabilitation services should be not only guide the child but also for the child’s family.

This may include guidance on how to manage stress and good parenting skills. It is also important to create educative childcare which helps the child prepare for school. Parental training programs may also help families who have delinquents develop tactics that will enable them to encourage the delinquent members to reform. This may be possible through; Creation of a bond between the parents and children; improving parental supervision and reducing abuse and neglect and the initiation of school programs that will enable poor performing children and delinquents to receive counseling. This will also boost class performance and classroom management.

The state should also ensure that there are adequate facilities for rehabilitating juvenile offenders. Most juvenile offenders who are incarcerated end up becoming repeat offenders because they do not reform. The mentally challenged juvenile offenders must also be offered better facilities that cater to their illnesses and offer guidance on how to carry on with life. Society should also avoid stereotyping delinquents because this does not help in their recovery. Labeling juveniles as delinquents even when they haven’t committed crimes makes it difficult for them to recover fully. Instead, they should be monitored and given emotional support to ensure that they do not go back to committing crimes. 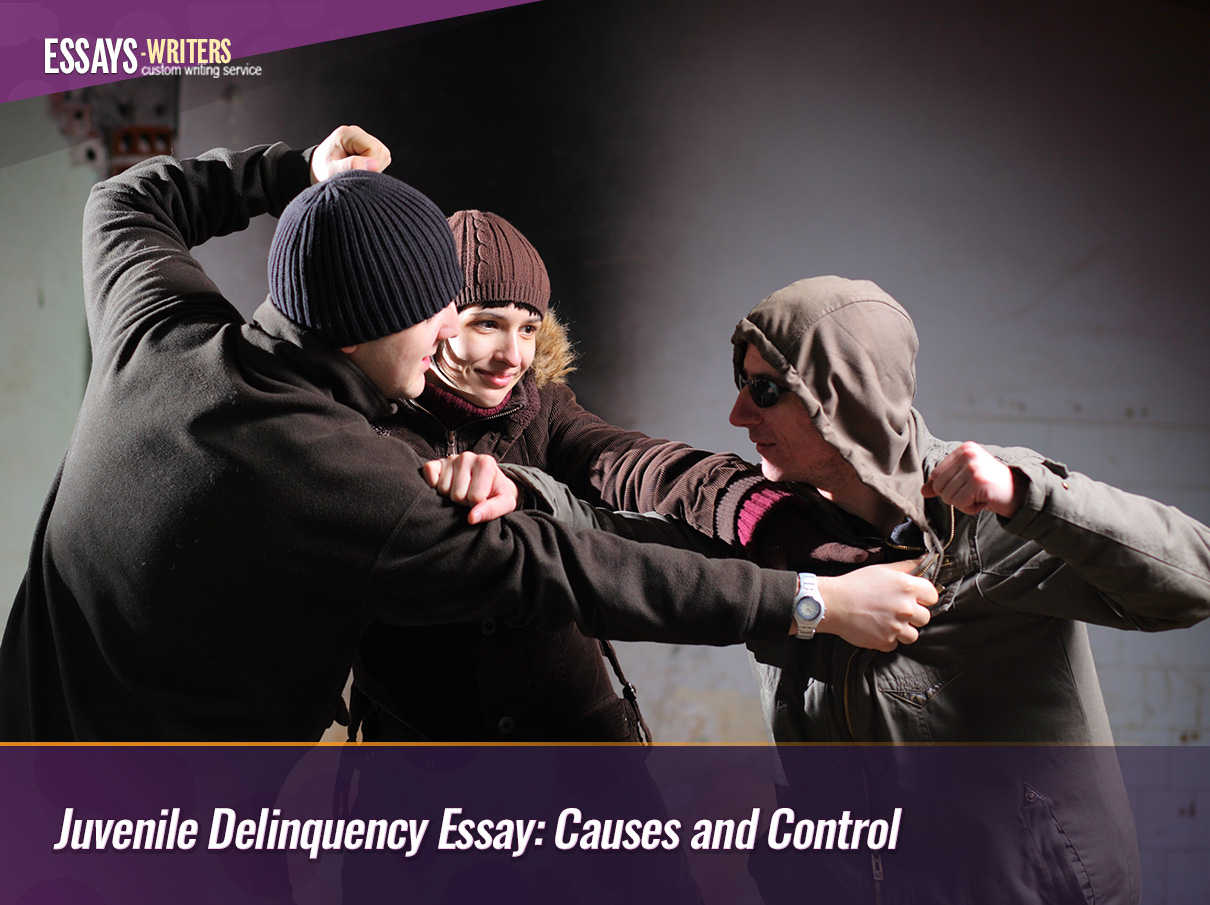 Juvenile delinquency is a multi-factorial issue that is best dealt with by employing multiple measures. Society, in general, has the role of ensuring that children are raised in the right way. The family has a role to play in ensuring juveniles do not end up being delinquents. The government should also ensure that mentally sick delinquents get better attention to avoid their incarceration. These facilities should also be adequate for the mentally sick as well as the other groups of delinquents. Society should always discourage juvenile delinquency by ensuring that the consequences of committing a crime are serious. Children and young adults should also be aware of these consequences so that they do not engage in crimes. Mentally challenged juvenile offenders should be given adequate support even after they leave the institutions.